The fighting with the Democratic ranks just keeps getting better every day. It is clear to everyone watching the campaigns and the debates that the Democratic convention as a whole does not want Bernie Sanders or any of the other socialists to win the nomination.

The Democrats would rather have Michael Bloomberg as their candidate because none of the other dirty Democrats stand a chance to win against President Trump. And now it seems that even Bloomberg is not the favorite because he has made statements to people that have angered voters all around the nation. But the fighting just keeps getting better as now Bloomberg is accusing Bernie Sanders and his corrupt campaign for vandalizing their offices. 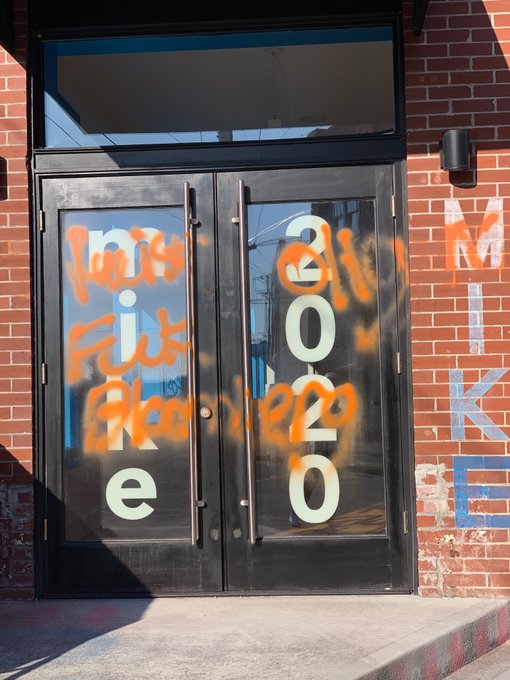 The office in Knoxville, Tennessee was hit with spray paint by what Bloomberg is saying Sander supporters. The statement on the door was directed to Bloomberg himself. The statement that was made is right in-line with what Sanders and his supporters are saying about the Bloomberg campaign.

The same kind of fighting has been seen in the Democratic Party for the past three years. The younger party members are challenging the established leadership and demanding a new direction.

Alexandria Ocasio-Cortez has repeatedly been disrespectful towards Nancy Pelosi to the point that Pelosi has had to come to some sort of agreement with her as to protocol. The fighting that is happening is just another indicator as to the health of the most liberal and anti-American group ever to exist in the history of the nation.

Bernie Sanders is accused of attacking the Bloomberg campaign office. The vandalism they have incurred is being said to be in line with what Keven Sheekey, who is Bloomberg’s campaign managers is saying that it “echoes language from the Sanders campaign and its supporters.”

It does not matter who did the vandalism but Bloomberg is calling “on Bernie Sanders to immediately condemn these attacks and for his campaign to end the Trump-like rhetoric that is clearly encouraging his behaviors to engage in behavior that has no place in our politics.”

The act of vandalism took place at night. The Knoxville police are investigating to try to find out whom it is that did the deed. So far there are no suspects that have been identified or even questioned.

The vandalism took place just one day after Bloomberg verbally attacked Sanders and his campaign. This is nothing more than a case of an upset voter taking their rage out on the opponents.

This kind of behavior is a trademark to the entire Democratic convention. They and their supporters violently attack Republicans and others that do not agree with their way of thinking.

Elizabeth Warren stated that “I’ve said many times before, we are all responsible for our supporters, and we need to step up.” For people to act this way is just not consistent with reasonable people. But this is exactly what people get when they are crazy and ignorant as the Democrats.

Warren may have stated that they are responsible for how their supporters act, but she certainly does not pursue the right course of action when they get out of line. Not to forget that it can be impossible to determine whose supporter is at fault in the first place.

The Democrats are a group that is sketchy at best. They just cannot be trusted. When Sanders states that 99.9 percent of his followers are “decent human beings, are working people, are people who believe in justice, compassion and love. And if there are a few people who make ugly remarks, who attack trade union leaders, I disown those people.” One can only question the truthfulness of what he has stated.

(Liberty Bell) – It’s been almost six months since the 2020 presidential election and while elected officials in many of the contested states are m ...Read More

(Liberty Bell) – Minnesota is on the verge of devolving into complete and total chaos. With the most recent police shooting, dangerous and volatile ...Read More

Shock Video: “I Don’t Want To Say We Need To Start Killing All White Folks… But… Maybe They Need To Feel The Pain And Hurt”

(Liberty Bell) – The propaganda-pushing mainstream media outlets like CNN and MSNBC have directly caused division and hate in America unlike anythi ...Read More